an open letter to "one pissed off mother".

Karla Begley is a woman with multiple sclerosis who has a 13-year-old son named Maxwell who has autism. She often brings Maxwell to her mother's house in Newcastle, Ontario for sleepovers because Karla needs help taking care of him and because he loves watching the movie "Grease" with his grandmother. Recently, Maxwell's grandmother received this hateful letter in the mail explaining in great detail why Maxwell isn't welcome in that neighbourhood.

The letter-writer -- who signed the missive as "One pissed off mother" -- was brazen enough to suggest that Maxwell should be euthanized, but lacked the courage to state her real name. I have never lacked the courage to put my name behind anything I write or say, and that will not change in this hypothetical response if I was mailed this letter about my seven-year-old son with autism -- who is coincidentally also named Maxwell. 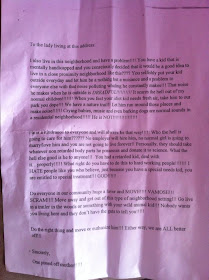 Dear “One pissed off mother”,

Your letter has left me feeling terribly sad. Not for me, or for my son Maxwell -- that’s his name by the way, not “retard” or “wild animal kid” -- but for you. In reality, I will never share your thoughts with my son, because he is a happy child who brings an incredible amount of joy to those who know him. And while your words were very hurtful to read, the support I receive from my family, friends, and my more understanding neighbours lifts me up on a daily basis and outweighs anything you could ever say to me.